A Tribute to MARTIAL DELEBARRE

The man who brought Fromelles to Public Awareness.

Martial Delebarre was born and grew up in Fromelles. Early in his life he became passionate about his village history. He walked the fields surrounding Fromelles, and found pieces which were left from fighting in World War 1.

At the end of the 80's he was one of the co-founders of the ASBF (Association du Souvenir de la Bataille de Fromelles) which later became (Fromelles et Weppes Terre de Mémoire 14-18 (FWTM 14-18 Association) which perpetuates the British and Australian soldiers’ remembrance, especially for the Battle of Fromelles on 19/20 July 1916.

Martial was the Secretary of the association and later its President.

At that time Fromelles was a forgotten battle in Australia and France.

At the beginning of the commemorations there were around 15 people at VC Corner which was the only place to commemorate the Australian sacrifice.

Little by little Martial, helped by the late Claude Durand and his wife Colette from Bullecourt, forged a strong relationship with the Australian Embassy in Paris and the Embassy started to send officials for the commemorations of the Battle of Fromelles.

In 1990 the Fromelles Weppes Terre de Mémoire 14-18 created a museum in the attic of the town hall at Fromelles, which exhibited many of the artefacts found on the old battlefield.

Martial contributed in the opening of a museum. And he would go on to build a strong friendship between Australian people and Fromelles. He started to welcome Australian pilgrims at Fromelles.

An early example of such friendship being created is contained in the following photograph, which shows Martial Delebarre with Neville Kidd and John Laffin in June 1990.

In 1998 Martial was one of the main enactors for the opening and dedication of the Australian Memorial Park and the Cobbers statue. 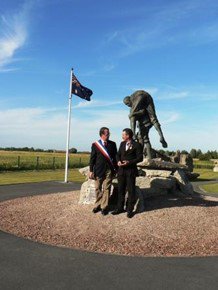 In 2005 Martial was awarded Member of the Order of Australia, “For service to Australia-France relations, particularly the preservation and promotion of Australian military history in Fromelles.”

2008 saw the approval being granted for an exploratory excavation of the site identified by Lambis Englezos, Ward Selby and John Fielding as that of a mass grave next to Pheasant Wood at Fromelles.

Martial Delebarre would join the dig team having been a Commonwealth War Graves Commission (CWGC) officer of some decades. He was permitted by the CWGC to work beside the GUARD team for three weeks as part of the special project at Fromelles. This was a reflection of his long interest in matters related to the battlefield and of him being one of the founders and driving forces of the Fromelles & Weppes Terre de Mémoire 14-18 (visit the FWTM website at www.asbf14-18.org).

With thanks to the Fromelles Discussion Group for their contribution.

Martial was invited in 2008 to attend the unveiling of the Cobbers statue at The Shrine, Melbourne, in memory of those who fought and fell in the Battle of Fromelles 19-20 July 1916.

Officiating at the unveiling of the ‘Cobbers’ Statue at the Shrine of Remembrance on 19 July 2008, chairman of trustees John Taylor introduced the Premier of Victoria, The Honourable John Brumby MLA who demonstrated not only a grasp of the history behind the infamous Battle of Fromelles, but enthusiastic support for commemorating our Great War dead. Cast from the original mould by Peter Corlett (who was present at the ceremony), the sculpture had a powerful effect on those who attended and was generally felt to be moving and inspirational.

It involved a catafalque party led by Senior PSO Lee Andrews, the Mayor of Fromelles Monsieur Hubert Huchette and Martial Delebarre, one of the founders of L’Association pour le Souvenir de la Bataille de Fromelles (ASBF) and a great supporter of investigations into Pheasant Wood.

Also present were prominent members of the Friends of the 15th Brigade Garrie Hutchinson, well known military historian Robin Corfield, amateur military researcher Lambis Englezos and compatriot Tim Whitford. The discovery of the burial pits at Fromelles was the catalyst for the second casting of the statue and its placement at the Shrine. The original sculpture stands at Australian Memorial Park, Fromelles and was commissioned in 1998. Sculpted by Peter Corlett, it depicts Sergeant Simon Fraser of the 57th Battalion carrying a wounded member of the 60th Battalion to safety.

2009 saw the 93rd Anniversary of the Battle of Fromelles commemorated in France at three services held at significant locations at Fromelles on Sunday 19 July 2009.

The services took place at The Australian Memorial Park, Fromelles, at VC Corner Cemetery, and at Pheasant Wood, the site of the mass burials of Australian and British soldiers who fell in the Battle of Fromelles by the German Army.

Martial was on hand to assist, as he had done for many years, in the official ceremony on the day.

A message from Lambis Englezos, whose research efforts were responsible for locating the graves of the missing from the Battler of Fromelles, was read by Mr David Richardson, Deputy Director-General of the Commonwealth War Graves Commission (CWGC) and the Mayor of Fromelles, M Hubert Huchette.

The remains of the soldiers recovered from the mass grave at Pheasant Wood were re-buried in the new cemetery, Fromelles (Pheasant Wood) Military Cemetery, from 30 January, 2010.

On a cold and drizzly Monday, 8 February, 35 soldiers were re-buried with military honours.

On Wednesday 10 February, 24 soldiers were re-buried with military honours in freezing cold and snow.

30 soldiers were re-buried with military honours on Friday 12 February, bringing to completion the duties of the 1st Battalion Royal Regiment of Fusilliers.

The re-burial of 17 soldiers occurred on Friday 19 February 2010. This meant that the remains of 249 of the 250 soldiers recovered from the burial pits at Pheasant Wood had been re-buried with military honours.

The final re-burial would occur at the dedication of the Fromelles (Pheasant Wood) Military Cemetery on 19 July, 2010.

Mike Rimmer of Families and Friends of the First AIF would present an Australian Flag to the Association pour le Souvenir de la Bataille de Fromelles en 1916 / F.W.T.M., Fromelles Weppes Terre de Mémoire 1914-1918 who operated the then Fromelles Museum in the roof top of the Town Hall at Fromelles. Staff would continue to welcome to visitors and explain the history of the Battle of Fromelles to them.

2016 Saw a Special Event to Welcome Martial and Catherine Delabarre to Sydney.

On Thursday 8th September 2016, we were treated to a special gathering at The Bowling Club, 99 York St, Sydney NSW, to welcome Martial and Catherine to Sydney.

This was in recognition that Martial had played a leading role into the investigations that resulted in the rediscovery and exhumation of deceased Australian and British soldiers who died in the 1916 Battle of Fromelles in northern France.

He and Catherine, were visiting Australia in September as the guests of their friends Jim Munday and Tony May.

They would be going on to visit Mudgee, Wellington, Bodangara (16th) and Canberra.

Martial presented an illustrated talk on his role in the investigation of the Battle of Fromelles and its importance to him and to Australian military history.

Martial would continue to be involved in the Fromelles Day 2021 Commemorations @ Fromelles, even when there was the presence of covid 19 virus.

In Sydney and Melbourne of 2021, there was no official ceremony due to the number of new cases of COVID19.

Meanwhile in Fromelles it was very hot, around 27°C, no wind, sunny and clear! A service was able to take place, and in addition to the formal service, Martial and Catherine Delebarre were able to lay wreaths separately.

For the association A.S.B.F.* and then F.W.T.M.14-18, it was a special event, as it was the 30th anniversary of their first celebration of the Battle of Fromelles. Recall for a moment that in 1990 the Association pour le Souvenir de la Bataille de Fromelles (A.S.B.F. 1914-1918) of which Martial Delebarre has been a part from its inception, had created the Fromelles Weppes Terre de Mémoire 14-18, a museum in the town hall at Fromelles, which exhibited many of the artefacts found on the old battlefield.

Earlier that afternoon, a wreath was laid by Martial and Catherine Delebarre on behalf of the F.W.T.M.14-18 at the Kennedy Memorial to Commemorate those who fell in the Battle of Aubers Ridge on 9 May 1915 as well as those soldiers of the British 61st Division in the Battle of Fromelles on 19 July 1916.

Prior to the Commemorative Service, Martial and Catherine had also laid a tribute on behalf of FWTM at the headstones of the Wilson brothers Sam and Eric, both killed in the battle and lying side by side.

At 6pm, the bells of the church were ringing and the important persons of the ceremony entered the very beautiful well flowered cemetery!

The Commemoration at the Fromelles (Pheasant Wood) Military Cemetery commenced with the entry of about 40 flag bearers from various sections of the L’Union Nationale des Combattants (UNC – similar to the RSL Sub-Branches in Australia). Some had travelled significant distances and is testament to the esteem in which the memory of the Australian soldiers’ is held in France.

Around 100 people were there, silent, moved with a profound respect for the Australian soldiers killed in action during the 2 days of the Battle of Fromelles.

Individual tributes were laid to the fallen with children of Cobber's School laying 2 roses (one white & one red) at the graves of soldiers “Known unto God”. There was a stone on the headstone to make it easier for them to find the grave.

The ongoing commemorations at Fromelles can be traced back to the original actions undertaken by Martial Delebarre and the ongoing work of Fromelles Weppes Terre de Mémoire 14-18 (F.W.TM.14-18).

Pierre Seillier, who continues to assist with the remembrance of the soldiers who fought at Fromelles in all the years of World War 1, has had the blessing of having Martial as his best friend for more than 30 years. Martial is the godfather of Pierre’s second daughter. In Pierre’s humble estimation:-

“Today we can say that without Martial nothing would have been possible at Fromelles.”

Martial retired from his work at the Commonwealth War Graves Commission, on 30 June, 2021.

We wish to thank Martial, for all his generosity, and his devotion to the soldiers of Fromelles.